The ceremony was held virtually and witnessed the honouring of ten winners across various categories of the award. H.E Abdul Rahman Al Owais, Minister of Health and Prevention and Chairman of the Board of Trustees of SHAMS, emphasised the significance of choosing Artificial Intelligence (AI) in healthcare, as the topic for the eleventh term of the Grand Hamdan Awards. He said this choice reflects “His Highness Sheikh Hamdan bin Rashid Al Maktoum’s vision as the driving force behind the Awards to include innovation in healthcare and scientific research.”

His Excellency praised the fruitful cooperation between the Award and the Office of the National Program for Artificial Intelligence, affiliated to the Prime Minister’s office. He especially noted His Excellency Omar Sultan Al Olama, Minister of State for Artificial Intelligence, Digital Economy and Remote Work Applications, as well as members of the joint scientific committees. He also conveyed the congratulations of His Highness Sheikh Hamdan to all the winners of this term, to join the collection of distinguished scientists who have been honoured in its previous terms. The Minister thanked His Highness for his keenness and continuous, unlimited support for the Award. He also thanked the members of the Board of Trustees, members of the General Secretariat of the award, the scientific committees and all attendees.

During his speech, His Excellency Omar Sultan Al Olama, expressed his happiness in participating in this distinguished event to celebrate the achievements of the winners of the Award. He also extended his appreciation to all the workers in the health sector, headed by His Excellency Abdulrahman Muhammad Al Owais.

He also stressed that the UAE has embodied a vision to invest in the most advanced AI technologies and tools and their applications in the various vital sectors, especially in the medical sector, thereby promoting a healthy lifestyle for all the members of society.

“I can only express my sincere thanks, appreciation and gratitude to H.H. Sheikh Hamdan bin Rashid Al Maktoum, Patron of the Award for his continuous support and his vision to empower scientists and the sciences and his relentless pursuit of innovations in this field. May Allah grant him success and grant us all the power to serve the interests of the people”, the Minister said.

Under the patronage of H.H. Sheikh Hamdan bin Rashid Al Maktoum, the Award has contributed to innovative and creative initiatives in the advancement of the medical and health sectors within the country and abroad. During the ceremony, a short clip of the work and achievements of the Award over the past 20 years was screened. This was followed by the unveiling of the names of the winners and celebrating their significant acheivements.

The Grand Hamdan International Award was presented to Prof.Bradley Nelson, from the United States of America, Head of Department of Mechanical and Process Engineering and Professor of Robotics and Intelligent Systems at ETH University in Zürich. His research focuses on micro-robotics and nano-robotics, highlighting its applications in biology and medicine. 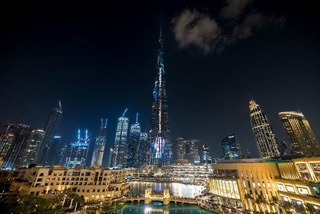 Prof. Bradley Nelson, the winner of the Grand Hamdan Award in the lights on the Burj Khalifa on 9th December 2020

The Hamdan Award for Volunteers in Humanitarian Medical Services was awarded to the Supreme National Committee for Volunteerism during Crises, created by a decree from the Cabinet of the UAE as an initiative to support community services efforts and aims to develop an integrated and sustainable national volunteering system during times of crises.

Kuwait: In the Arab World Awards category, the Hamdan Awards for best Medical College, Institute, or Centre in the Arab World, was given to the Dasman Diabetes Institute. The institute was established under the patronage of His Highness Sheikh Jaber Al Ahmed Al Sabah and the Kuwait Foundation for the Advancement of Sciences (KFAS) to address the diabetes epidemic in Kuwait, through focused research, integrated prevention, training and education.

UAE: Among the UAE awards, the Hamdan Award for; Outstanding Clinical Department in the Public Sector in the UAE, was given to the Radiology Department in Rashid Hospital, Dubai Health Authority. The department is known for the quality health and educational services at a regional level and is recognised as an excellence centre for stroke, inflammatory bowel disease and multiple sclerosis.

The winners of the Hamdan Award for Distinguished Medical Personalities in the UAE are:

The ceremony concluded with a dazzling display of all the winners of the eleventh term on the façade of the Burj Khalifa, the tallest building in the world, in honor of their achievements in the field of medicine and scientific research.